Everybody was cheering. The music was blasting. I just was one of the many who was there, but I was also a Compassion volunteer, a volunteer who helped some kids get sponsored.

Why We Were There

At first, I was a little uncomfortable. I had only been to about 1 concert before, and that was at our church. I know that concerts are loud. Concert? I thought. But then my thought after, my sensible part of my brain told me, “Melody, it’s for a good cause. You can change people’s lives.” So that’s how, I, Melody, ended up in San Francisco for half a day and late into the night with screaming people. (I was not one of them.)

I went to my dad’s work at about 3:30 in the afternoon. If you know me, and I had one short talk with you to introduce myself, you would know that I like singing. And drawing. And writing. So, while I was at his workplace, I drew. He also showed me around. It was pretty nice, with a cafeteria, break room, view of the Bay Bridge…everybody wants a good view of the bridge, right? The view also was around where his coworkers worked, so that that was nice. He introduced me to them. You really can’t believe how quiet workplaces are! You could hear every word that was said. I felt like I was being loud!

We walked to the Martin Luther King Jr. Memorial, which had a waterfall. There was a gushing sound as we walked under the waterfall – I have no idea why they let visitors do this, but they do! And I didn’t get that wet. It’s at Yerba Buena Gardens. Supposedly, when it’s warm outside, which it wasn’t on this particular day, people can sit and have picnics on the lawn. People were still sitting, and it was cold! After that, we headed to have a daddy-daughter date at the San Francisco Centre mall. For dinner, we ate Panda Express and for dessert, we ate Ghirardelli’s Chocolate. I ate a sample of a caramel square. We both had the same actually. Then, we left to go to Warfield Theater. 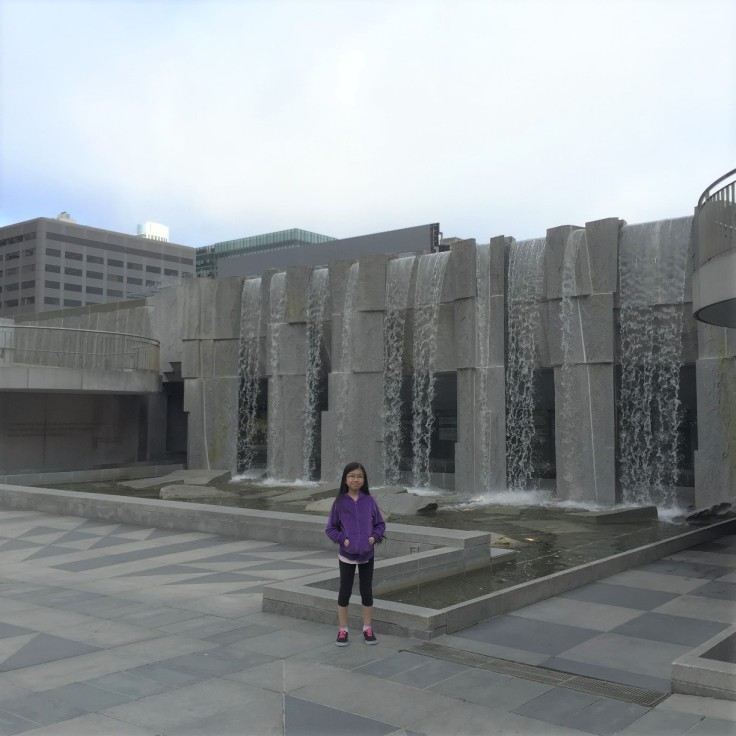 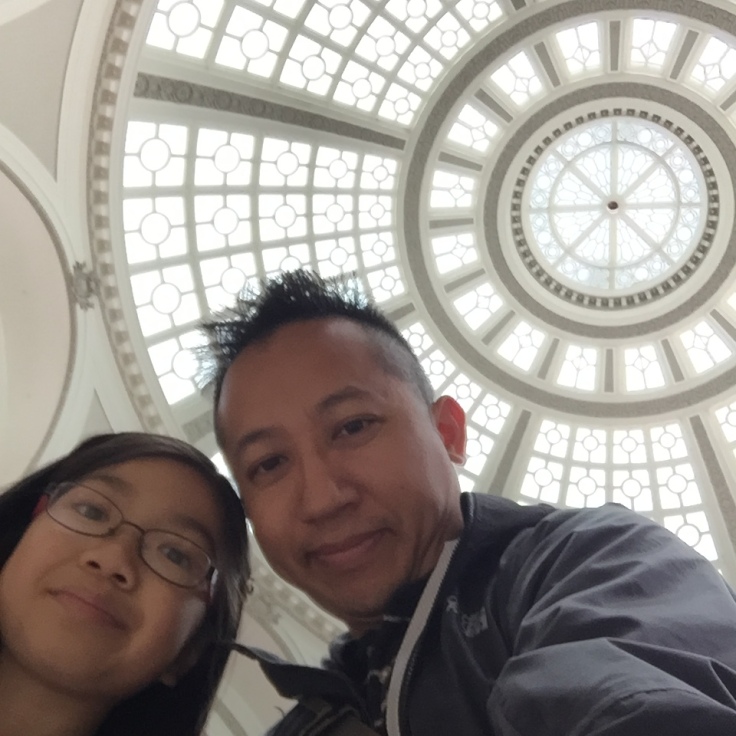 When we got there, there was a HUGE – no, HUMONGOUS – line out front. Most of the people looked like they were college-aged or teens. We had a problem getting in because we had to get in before the concert and had to skip the line. Finally, my dad just called our coordinator for the night. It was actually pretty easy to get there, but not if you were driving, due to San Francisco traffic, which if you live in San Francisco or have lived in San Francisco, you know it is bad. Mostly parking that night, and crowds, though. The entire show was sold out! We were lucky to have gotten where we were placed. 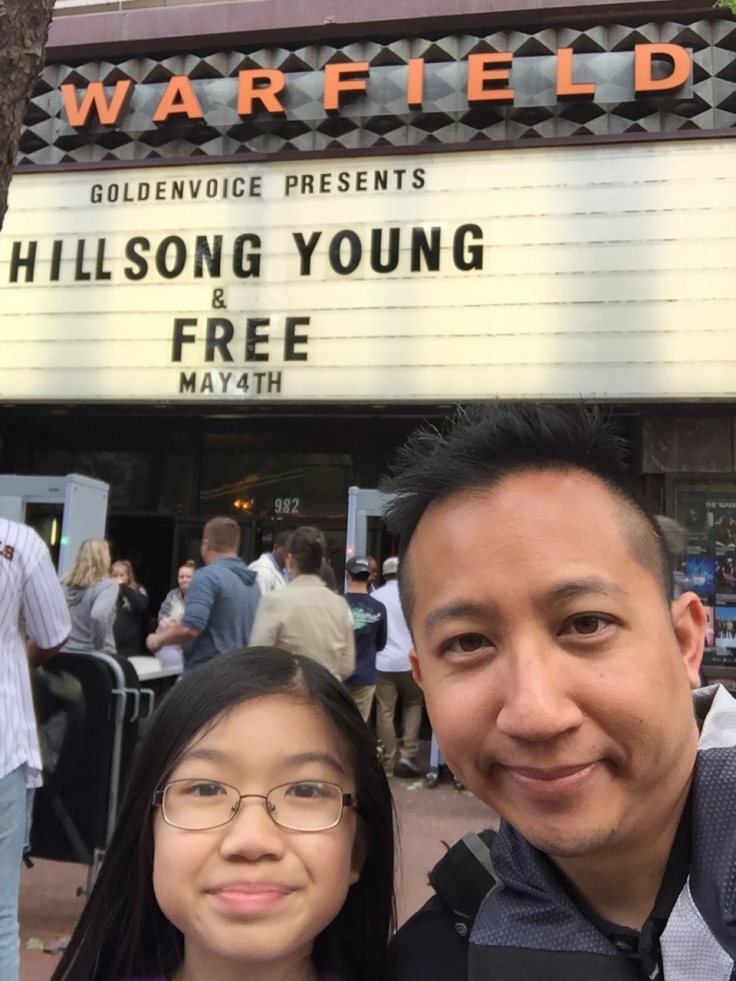 After we finally got inside, it definitely wasn’t how I expected it to be. I thought it might be a ton of volunteers and a huge theater. Warfield theater is small, on the bottom, but when you go to the balcony, on the top, you would rethink that. Some people mysteriously didn’t make it, so our group was small that night. I’d say about 15 people. We were told to sit down, and at 8:00, to come back and put on our Compassion aprons.

We basically enjoyed the whole show. There were flashing lights all around. Not every concert has that, I can assure you! Screaming people, mostly at the end, and at one song, they even turned on their cell phone flashlights! We weren’t sure we were where we were supposed to be, so we hurried all the way back down to check – oh, and also, did I mention, Warfield has a lot of stairs, too! We got to put on our aprons, but then I had to take mine off because some people in the front didn’t have any. Then somebody gave their apron to me. Again, I was asked to take my apron off…until they came with a refill of aprons. Hooray! What a lucky day! We rushed to our spots and then waited for the signal, which was “I’ve got some friends here to help me…if you’d like to sponsor a child, raise your hand.” I was leaning against the banister with my dad since there were no seats because the concert was sold out, as I mentioned before. Once we were signaled, all of the volunteers rushed forward to pass out the packets. Each of the packets had one kid on them. So I passed out one, and one person in another section raised their hand, so I had to hand it out, even though it meant that I wasn’t giving it out in my zone. (Each person got a zone in the theater to hand out packets to)

In the end, we stayed until about 10:00 to pass out kids. That sounds funny, doesn’t it? My dad and I worked together to help somebody sponsor one, but other than that, I got nobody. Apparently, you’re lucky if you can get one. And with this young crowd, they would probably have to ask their parents first.

We went home, since it was past 10:00 p.m., and there was lots of screaming and a long line out the door. I can remember it very clearly if you ask me. Home again, home again. 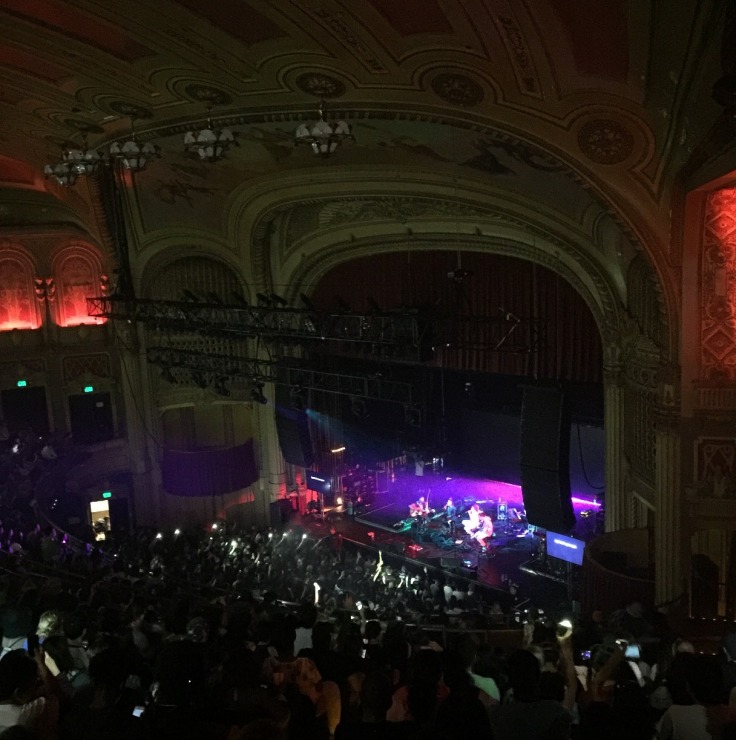 How Many Kids were Sponsored?

At the beginning, they did a head count and told us how many kids there were available to sponsor. During the sermon they were talking about for every kid, a generation is saved. I only got 3, but that’s ok.  I found out 75 children’s lives were impacted because of this event! That’s great!

The number of kids available to sponsor may seem like a lot, but there are even more kids out there. There were symbols on the cards that showed how much they were in danger. I organized them into the ones that were in the most danger because I really wanted them to be sponsored. But there were ones who were in danger who didn’t get sponsored. I know I had the opportunity. But I didn’t use it. So today, I ask you, what can YOU do to make a difference in this world? What can you do to potentially change generations? Remember: 1 child, 1 generation.

A Note From Melody’s Mom:

We have been sponsoring Compassion children since college days with our church youth group. Then, when the girls were little, we found two little girls who shared the exact same birth dates with each of our own. It has just been a part of the girls’ lives, and as we shared in another blog post, it is rare to find volunteer opportunities for younger kiddos, so we hopped right on this one when I saw the age for volunteering was 10! I remember (snail) mail coming to our house about children sponsorship when I was young and thought it was a weird thing to do, but learning more about the details of organizations like Compassion International and Badjao Bridge changes things. (Sidenote: If you search “compassion” on our old blog, you can read a few posts there. We also sponsor a little girl through Badjao Bridge if anyone is interested in learning more about my friend’s organization.)

What are some of the service projects you and/or your family have been a part of locally or globally? What was the experience like?

Other Links:
– Our friend’s trip as a Compassion Blogger
– Volunteer at Compassion Events
– Other ways to Get Involved with Compassion

This site uses Akismet to reduce spam. Learn how your comment data is processed.